As cable news ratchets up its coverage of the imminent approach of Hurricane Flo later this week, live shots abound, and everybody has a crack at a slice of that 15 minutes of fame.

Some seem to try harder than others, but it’s all futile when the reporter fails to notice what sits right in front of his face. 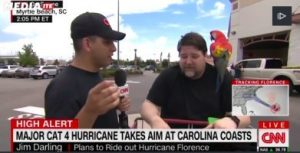 It’s all well and good when CNN reporter Nick Valencia turned to interview a Myrtle Beach, SC resident who plans to ride out the storm.

It’s always interesting to find out why people do crazy things like that.

It might have had something to do with the parrot on Jim Darling’s shoulder, but Valencia managed to completely ignore something that just begged for a question.

We didn’t really hear what Mr. Darling was saying, because watching the parrot was everything.

Oh, its name is Maximus.