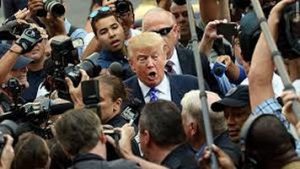 Of course, it doesn’t come without challenges for both professors and students.

Matt Tullis, a journalism professor at Fairfield University in Fairfield, CT provides an overview “of a tribe that is finding it has to change what and how it teaches when it comes to training tomorrow’s journalists because of the hateful rhetoric the president and his base use towards the free press.”

Journalism professors are changing up everything from First Amendment discussions to reporter safety to how to properly address current events in class without falling down the Trump rabbit hole.

Because, really, you can’t build a curriculum that focuses on every little outrage emanating out of Washington.

Hell, you shouldn’t be able to build a career on writing about every little outrage, even though there some who do (looking kinda sideways at Jim Acosta here).

“Trump stories can just eat up your entire semester when it comes to current events.There’s all this stuff that I want to talk about that is important, that has nothing to do with Trump, but if you let it, it will come up every day in discussion and become a dominant feature in the class, which I don’t want.”

Accuracy in reporting is paramount for professors surveyed by Tullis.

So is prudence – with political rallies increasingly focusing on the reporters’ presence, there is safety in numbers.

Dan Gillmor teaches digital media literacy at the Walter Cronkite School of Journalism and Mass Communication at Arizona State University, and has been critical of the White House press corps and other journalists for publishing everything the president and those around him say.

In June, he published an open letter to newsrooms: Dear Journalists, Stop Being Loudspeakers for Liars.

“Your job is not to uncritically ‘report’—that is, do stenography and call it journalism—when the people you’re covering are deceiving the public,” he wrote in the piece. “Your job is, in part, to help the public be informed about what powerful people and institutions are doing with our money and in our names.”

In the course of our career in tv news, we saw far too many “human mic stands” and stenographers and we can only add a hearty “Bravo.”