Tegna’s “Daily Blast”, a daily half-hour that airs on the company’s various platforms in its 36 markets hosted one of the more interesting discussions last week.

Unfortunately, you may not have access because the discussion was so inflammatory, it’s been scrubbed from those platforms and from Facebook and YouTube, where the program is also seen.

The segment, which began as a discussion of the publication of a racially- 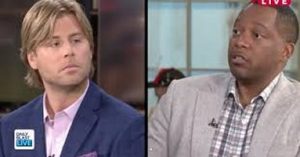 charged caricature of Serena Williams, quickly turned into a heated exchange between Al Jackson, one of the show’s newest members, and colleague Beau Davidson.

Racism is depending on who is privileged and who isn’t,” said Jackson. “The person who wrote [the cartoon] I’m assuming is a white male. And a white male can never understand what marginalized people feel and think.”

Then, for some reason, he went after Davidson.
“I have a master’s in biomedical sciences. I have over 200 TV appearances. You are the living embodiment of white privilege. You have no business on this panel with us, but you’re here because of your privilege. I have hundreds of black people, brown people in my phone that are more qualified, have done more in their career to deserve to be in that seat, but you sit there because of your white privilege.”

Defending himself, Davidson shot back with “I’ve had to fight for everything in my life,” adding that “when you look at somebody you don’t know what they’re going through. You have no idea what I’ve been through.”

As is the case with far too many of these “news program” discussions, what could have been a thoughtful exchange on a very real issue quickly turned into a series of attacks and defenses, full of sound and fury and signifying nothing.