A white woman in North Carolina is out of a $125,000-a-year job after being caught on camera berating a black neighbor, telling the woman, “I’m white and I’m hot, so what are you doing here?” 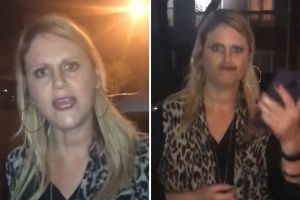 The now-former employee — who was apparently drunk and reeked of alcohol — was seen in a series of videos posted Friday on Facebook, where she was quickly identified as Susan J. Westwood, a senior business intelligence analyst and market researcher for Spectrum Enterprise in greater Charlotte.

A spokesperson for Charter Communications — which bought Time Warner Cable in 2016 and changed the cable company’s name to Spectrum — specifically referenced the videos filmed in a Charlotte parking lot.

“The incident recorded in Charlotte is a blatant violation of Charter’s code of conduct and clearly disregards the company’s commitment to inclusion and respectful behavior,” spokesperson Patrick Paterno wrote. “As such, Ms. Westwood’s employment with the company has been terminated, effective immediately.”

The African-American women repeatedly asked her to leave them alone and told her she was harassing them, according to the video. They said they were waiting for AAA to help with car trouble in the parking lot, and eventually they called 911.

Police spokesperson Keith Trietley wrote that four criminal summons have been issued for “the suspect” but the summons have not been served.