The Scripps Howard Awards, one of the nation’s most prestigious American journalism competitions, will accept entries from Dec. 1 to Feb. 8 for reporting and storytelling that gives light and changes lives. 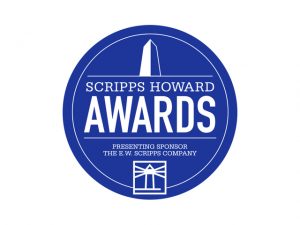 The Awards’ 66th competition will present $170,000 in prize money for work across 16 categories. The awards will be presented on April 18, 2019, with a live show hosted by Michelle Miller, co-host of “CBS This Morning: Saturday.”

With a focus on high-impact reporting, the awards recognize journalism that spurs action, news organizations that go the extra mile to expose previously undisclosed or misunderstood information, and journalists who embrace new tools, channels, technologies and approaches to provide more immersive experiences for their audiences.

Among categories including Visual Journalism, Environmental Reporting, Breaking News and Community Journalism, the Awards’ 66th competition continues with the Topic of the Year category, the focus of which is “The Midterm Elections.”

Past winners of the Scripps Howard Awards have represented some of the most important journalism of recent times. In 2018, The New York Times took home the Impact Award after winning the Investigative Reporting category for its series that uncovered stories of sexual assault across the country. The series led to cascading workplace investigations, criminal inquiries and inspired the #MeToo movement. Other 2018 winners included Vice News, San Francisco Chronicle, NPR, The Washington Post and The Kansas City Star.

Finalists will be announced on Feb. 26, with winners announced on March 5. The awards show will be held at historic Memorial Hall in Cincinnati on April 18.

Keep up with the latest news on the Scripps Howard Awards through Facebook and Twitter, and find out more about how to enter at shawards.org.