It’s been almost six years since Steve Lacy assumed the 5 and 10 pm anchor chair at Fox flagship WNYW in New York, two years after he joined the station from Boston as early-morning anchor.

But there is another dimension to him – as an artist. 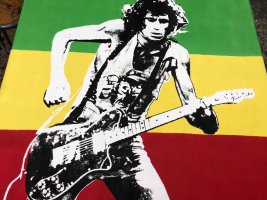 Lacy has struck up a collaboration with American rock music photographer Mark Weiss, known for his work capturing the images of The Rolling Stones, KISS and Madonna, among others.

For Lacy, it’s a passion project.

Not a bad fallback when the inevitable happens.