Longtime KXAS (NBC) Dallas entertainment reporter Bobbie Wygant has been in the business for 70 years. 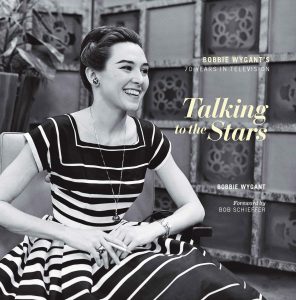 She recently published a memoir, “Talking to the Stars,” detailing her career and the celebrities she’s interviewed.

The book starts in 1939 when a 12-year-old Wygant — then named Roberta Connolly — accompanied her grandparents to the New York World’s Fair and toured RCA’s headquarters, where there was an experimental TV studio where visitors could talk to a TV camera.

Roberta took a turn in front of the camera and proved to be a natural.

Already interested in entertainment, she would join in audience-participation segments during concerts and more than once tracked down Frank Sinatra — when she was still a teen — for an autograph.

She later met her husband at Purdue University, who worked in radio and she was hired as a reporter for a new station in Fort Worth Texas in the late 40’s.

“Talking to the Stars” details her interviews with the Beatles and the stars of Star Wars.

It’s a hardback book with more than 500 photos, many of which feature Wygant talking to the stars in a way that will give those of us flashbacks: Dick Powell, Jimmy Dean, Donald O’Connor, Richard Chamberlain — well, that’s just one page of photos.

Flip to a page late in the book, and there are Gary Cooper, Lyle Lovett, Jane Fonda — and a much older Richard Chamberlain.

For more on Wygant, check out The Bobbie Wygant Archive at http://bobbiewygant.com.