And by 9:20 Eastern Tuesday night, many of us turned to each other to ask “Is that all there is?” 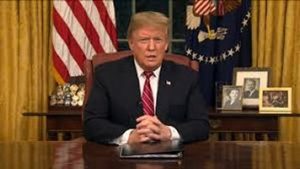 When he is tied to a teleprompter, Mr. Trump is incredibly wooden. And his address contained nothing that would persuade anybody to change their mind.

As he spoke, depending on what news outfit you were watching, there was fairly aggressive real-time fact-checking. 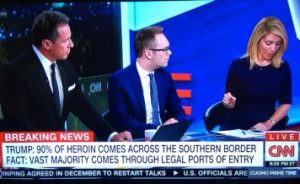 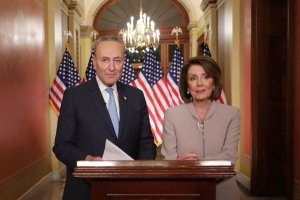 The makeup on Senator Schumer and Speaker Pelosi looked like it had been applied by someone from Madame Tussaud’s.

The really interesting stuff came before and after Mr. Trump’s wooden address and the Democratic leaders’ curiously subdued response.

The New York Times reports that during his “off-the-record” luncheon with network anchors earlier in the day, Mr. Trump told the journalists he wasn’t inclined to deliver the prime time address, but had been persuaded to do so by advisers.

He pointed to former Fox boss Bill Shine and press secretary Sarah Huckabee Sanders saying “But, these people behind you say it’s worth it.”

According to another source, he also conceded the speech was “not going to change a damn thing.”

But what the hell…in for a penny, in for a pound.

The other interesting development came after both sides had their say and the network talking heads took over.

Over on the Fox Broadcast Network, FNC maverick Shepard Smith committed heresy by the standards set by Suzanne Scott, boss of the sister cable outlet’s entertainment wing and doyenne of prime time.

Smith challenged many of Trump’s claims by using the government’s own numbers.

After Trump said that “innocent people” are being “horribly victimized” by immigrants who commit crimes, Smith quickly added perspective.

“The government’s statistics show that there is less violent crime by the undocumented immigrant population than by the general population,” he said.

Trump claimed that immigrants carry illegal drugs across the border.

“Government statistics show much of the heroin actually comes not over the unguarded border but through ports of call,” he said.

Before the speech, Reuters released a poll showing Trump’s border wall idea to be really unpopular, his shutting down the government over wall funding less popular still, and a growing number of Americans blaming Trump for the shutdown.

The whole charade, driven by Trump’s addiction to the Sean Hannity wing of Fox “News” and gasbag radio appears to be developing cracks.

And the networks just might think twice the next time a request for prime-time space comes from ANY Administration.