Oh, FFS, this is just out of hand.

CNN has hired yet another talking head, another politico-type who still has dreams of winning an election.

This time, it’s Andrew Gillum, the Democratic wunderkind who fell short in his race for the governor’s office in Florida last November. 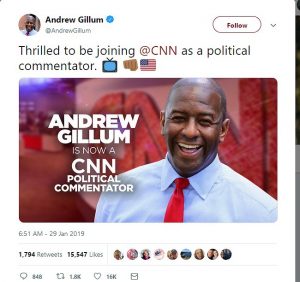 We wish we were.

“This is CNN, not Fox. You have to bring facts to the conversation,” Gillum told his Republican Florida gubernatorial opponent Ron DeSantis on air, during a televised CNN debate back in October.

And it probably secured him the job.

BTW, CNN, you DO know Gillum still faces an ethics lawsuit, in which he is being accused of accepting gifts as a politician?

We feel so much better.