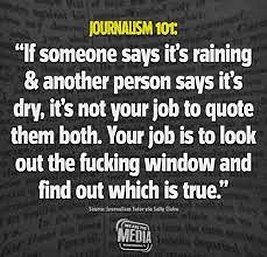 We’ve been hearing this for some time in various corners of the Internet and in bars where journalists hang out late at night for ongoing bitch sessions.

“B-b-but,” we can hear the stammer. “Aren’t we supposed to being getting both side of the story? To be fair and…balanced?”

Indeed, we spent a lot of time in the various newsroom in which we worked telling younger colleagues that if they were being criticized by opposing sides of an issue for a story they did, it must mean they presented a fair account.

On the other hand, especially in today’s fractured environment (both societally and structurally) if EVERYONE is criticizing you, it just might mean you’re not doing your job well.

This arguments came out in the open recently courtesy of a fine piece from “Washington Post” columnist Margaret Sullivan, who took off on what she calls the “middle-lane approach to journalism.’’

“One of the supposed golden rules of journalism goes like this: ‘If everybody’s mad at your coverage, you must be doing a good job.’

“That’s ridiculous, of course, though it seems comforting. If everybody’s mad, it may just mean you’re getting everything wrong.

“But it’s the kind of muddled thinking that feels right to media people who practice what I’ll call the middle-lane approach to journalism — the smarmy centrism that often benefits nobody, but promises that you won’t offend anyone.’’

One only has to look at Sunday’s Super Bowl interview with Mr. Trump, and to recent sit-downs with barista-cum-presidential aspirant Howard Schultz and former professional Senatorial hand-wringer Jeff Flake to see what Sullivan is railing against.

Schultz is the latest media darling based solely on his tenure at Starbucks and his “fiscal conservative, socially liberal” reputation, but his reign on that throne is already about over because of his inability to avoid taking offense at every criticism.

Flake, who’s now a CBS News gasbag and former Ohio Governor John Kasich – who now spews gas for CNN, both gained gravitas in the eyes of Beltway and Beltway-inspired journalists.

Sullivan had both squarely in the crosshairs in her column:

What crucial views do these guys represent, anyway? Kasich was blown out of the water by Donald Trump in 2016, and Flake was a weak-willed resister — all eloquence and no spine.

“Both-sidesism” is the easy way out these days.

It is a weak attempt to pander to the entire spectrum and ends up telling us nothing.

Which does our democracy a great disservice.

We’re not advocating a “left or right” approach.

We’re all about a TOUGHER approach, where reporters should have the fortitude (and the preparation, of course) to ask the tough questions and ask them again if they’re given predictable boilerplate.