There oughta be a law, but as long as former members of Congress and various government agencies can cash in big on their connections by running toward K Street, fat chance of such a law ever being passed. 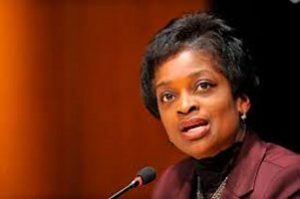 The latest is Mignon Clyburn who, during her term on the Federal Communications Commission, was viewed by many as the anti-Pai – the person who spoke up on behalf of consumers against some of the more egregious policies pushed by the commission’s industry lobbyist-chair.

Clyburn left her post last year, telling media outlets at the time she would “be a better public servant not serving on the FCC.”

Clyburn is now employed by T-Mobile to help smooth the way for the company’s $26 billion merger with Sprint.

Once upon a time she would rail about these kinds of mergers but now:
“I’m advising T-Mobile and Sprint as it seeks to accelerate the creation of an inclusive nationwide 5G network on how to best build a bridge across the digital divide,” Clyburn said in an interview.

Critics of the merger have said it will harm low-income communities and communities of color – a primary target of the two companies over the years.

They argue it’ll drive job losses, in part as a result of store closures in urban areas.

Wall Street analysts have predicted the deal could eliminate anywhere between 10,000 and 30,000 jobs

In addition, the combined company will likely shift focus to competing against AT&T and Verizon for higher-income subscribers.

T-Mobile has pulled out all the stops in recent months in a bid to nab regulatory approval, including having executives stay at the Trump hotel in DC, and hiring former Trump campaign manager Corey Lewandowski.

And now, a former “consumer advocate” reaches for the lobbying brass ring.