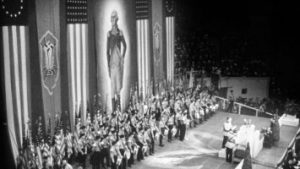 A commercial promoting an Oscar-nominated anti-Nazi documentary was rejected by Fox News Channel, which deemed the ad “inappropriate.”

“It Can’t Happen Here” is a short documentary about a 1939 American Nazi Party rally at Madison Square Garden.

In its rejection, Fox said that CEO Suzanne Scott decided the ad was “not appropriate for our air.”

”The ad in question is full of disgraceful Nazi imagery regardless of the film’s message and did not meet our guidelines,” said Marianne Gambelli, president of ad sales for Fox News Channel, in a statement.

The producers of the documentary were being somewhat provocative – they wanted the ad to air during Sean Hannity’s nightly Fox News program.

One might conclude the deliberate placement asked for by the documentary producers was an “in your face” move.

Scott, of course, is the Fox exec in charge of the network’s primetime opinion programming.

It’s not the first time something this has happened.

In August 2017, CNN declined to run a paid advertisement from the Trump re-election campaign because it portrayed some of the network’s news personalities as “enemies” of the president, a decision the campaign decried as censorship.