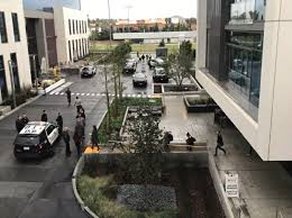 The man, who was taken into custody but ultimately released without charges, was never actually on the lot, according to Los Angeles Police.

But for several hours, the offices of streaming service Netflix and the studios of Tribune’s KTLA felt under seige.

KTLA employees were alerted that they were on lockdown about 4:26 p.m., and were advised to avoid windows. Soon after that, aerial video from Sky5 showed people being led out of Netflix’s Cue building in the middle of the lot.

A suspect was detained about 5 PM at his home.

The man was a recently-fired Netflix worker who called a coworker claiming to be on the lot with a firearm, which spurred the lockdown.

He was released several hours. later with no charges.

But it gave the rumormongers on social media something to stir up for awhile.

We’re torn as to whether they or the fired worker earn the
Bonehead” title.

Call it a draw.