Insiders at KGBT (CBS) say a new boss is coming to town. 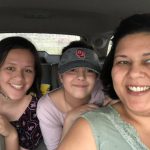 Zoltan Csanyi-Salcedo had been news director for Sinclair-owned Harlingen, Texas station since 2015 but left a few months back to run the shop at KYTX (CBS) Tyler.

KGBT‘s Assignment Editor reportedly has been running the show since.

Sullivan, pictured with her daughters here, will start in March.