This comes comes after a nine-day sentence for nearly running people over during a drunken road romp in August. 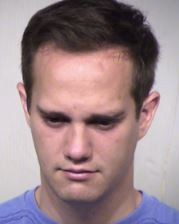 West’s confession can be found on his  public Facebook page in the form of a 3,200-word essay published on February 17.

However, West, who apparently still works for KPNX, writes that he’s taking a break from journalism for a while.

This all stems from an August 8, 2018,  where he was accused of ramming a car in a Phoenix McDonald’s drive-through, cursing at employees, and refusing to leave, he eventually sped off when approaching cops yelled at him to stop, court records show.

Police say he flew through a stop sign in a residential neighborhood at 50 mph with a cop car on his tail, cruising into an apartment complex parking lot, where he almost hit a pedestrian and another car before finally stopping.

The reporter blew a .239 BAC in a preliminary breath test. He later pleaded guilty to extreme DUI and failing to obey police commands. He finished the nine-day sentence in  Jail on January 31, as Phoenix New Times reported.

He says he doesn’t remember the incident.

He’ll have to serve an additional 21 days in jail if he blows off his probation terms in the next two years, and has agreed to participate on a MADD Victim Impact Panel.

West writes in his essay he’s been sober for six months now.