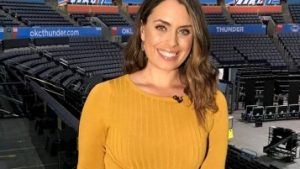 She’s coming from KOKH, the Sinclair outlet in Oklahoma City, OK, where she was weekend sports anchor/reporter.

Gannon was a competitive swimmer while attending the University of Connecticut, a bit of history she evidently likes to include in her bios wherever she turns up.

Not that there’s anything wrong with that. We have an entire roster of competitive swimmers (and divers) in the nearer reaches of our family tree.