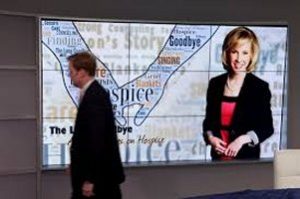 But the ghouls of the Internet can’t help but pick over the memories of the slain WDBJ staffers as some on the tinfoil-hat fringe try to push theories that the entire nightmare was staged.

Mouth-breathers and their crackpot idiocy prompted Andy Parker, the father of Alison, to write an op-ed piece for the “Washington Post” slamming YouTube and Google for helping spread the moronic ravings of the conspiracy nuts.

Parker claims that pro-gun conspiracy theorists have used the video-sharing platform to spread conspiracies about his daughter’s murder.

That is evidently in retaliation for Parker’s becoming an outspoken gun control advocate after the tragedy of losing his daughter to a nut with a gun.

“Countless people have targeted me and my family online, claiming that Alison’s death was faked as part of some diabolical conspiracy to seize their guns,” Parker wrote. “They have taken the gruesome footage of my daughter’s murder, edited it into videos selling these lies and flooded YouTube with hate-filled diatribes maligning my family.”

Parker said that in a search for Alison’s name on YouTube, he was led “down a rabbit hole of painful and despicable content, including claims that Alison had plastic surgery and was living a secret life in Israel.”

Parker wants a crackdown on questionable content and tougher guidelines as to what can be posted in the first place.

And while we have some reservations, we also note that those who scream the loudest in opposition to Parker’s ideas and ideas like them are usually the biggest offenders on the Internet.