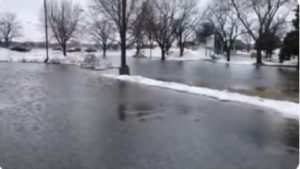 Video posted on Twitter by KDLT shows roads and parking lots leading up to the news station in Sioux Falls flooded even as snow from a recent storm still remains on grassy areas.

Several employees reportedly made it in to the building by wearing waders, but general manager Katie Haffeman said bringing enough employees inside to host regular broadcasts would be impossible.

The stations deployed its crews around town and they were busy posting stories and live hits on social media.

Which, when you think about it, is the newscast of the future.