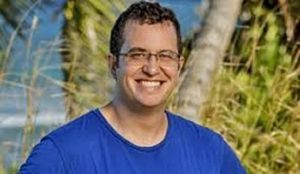 Macon, GA morning anchor, “Survivor 38” contestant Rick Devens was voted off the island, but what the hell, it was a dream come true.

And the way that “Survivor” plays with the rules, he may yet be resurrected at the end of the season.

Never mind that he’s father to an infant and four-year-old back home in Georgia.
“They say it takes a village to raise a child. My wife Becca and I were glad to have a village when I decided to run off for seven weeks to live out a dream on an island in Fiji,”  Devens said.

His employer, Sinclair’s WGXA, was no doubt happy to give him the time off since they were able to milk it for a sweeps’ month’s worth of “special reports.”

Devens said participating as a constant on “Survivor” was a dream that pre-dated his marriage. His wife was always on board.