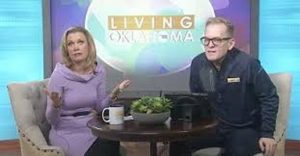 The Lost Ogle Blog says it has learned (via the vaunted Ogle Mole Network) that OKC media personality and news mommy, Meg Alexander, was let go as the host for Sinclair’s KOKH pay-to-play morning show “Living Oklahoma” this past Friday morning.

He reports that she was placed on temporary leave back in February after she displayed some odd and slurry behavior on the set show that she later attributed to a “lack of sleep.”

Exhibit A appears to be this segment about Valentine’s Day flowers.