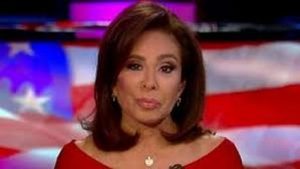 “None of your damned business,” continues to be the response of Fox News to queries as to whether program host “Judge” Jeanine Pirro was suspended by the network.

Funny, the Fox response of “we are not commenting on internal scheduling matters” doesn’t exactly square with its gleeful mugging of former Fox News staffers who have run afoul of somebody – ANYbody – in the executive suites.

Pirro’s suspension, which  has been reported by both CNN’s Brian Stelter and “New York Times” reporter Michael Grynbaum, came roughly one week after Pirro made a series of unsubstantiated claims against Minnesota freshman congresswoman Ilhan Omar – including charges that she is “sharia compliant” and not loyal to the U.S. Constitution because she wears a hijab.

Will she be back next week?

Again, none of your damned business.

Fox News condemned her remarks in a statement earlier in the week .

Pirro’s fans, led by Mr. Trump, are demanding that Fox bring back the race-baiting TV host.

“FOX NEWS!!! You’re OWNED BY THE ESTABLISHMENT!!! GET THE JUDGE BACK WITH A SPECIAL MID-WEEK AIRING!” demanded a man identifying himself as Todd N. Sanderson, who tweets under the handle @viperBSG.

From Texas came the threat “If she goes so does Fox news in my household and in my families households!” said @dahl_nora. “And SNL is never watched by any of us because their show is nasty and vulgar and they are always making fun of people.”

A fine bit of sucking up to Mr. Trump but then….SNL’s job IS making fun of people and has been for 40+ years.

@dahlnora has been missing the joke for that long.