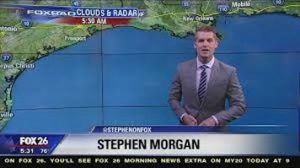 In February of 2018, we told you how KRIV reporter Stephen Morgan picked up the clicker and did the Sunday evening weathercast for the station.

Morgan has moved to the weekend weather desk permanently.

And why not, considering his university degree is in meteorology.

Morgan begin his career in broadcast journalism in 2013 as an anchor and reporter in KRBK in Springfield, Mo. where he also filled in as a meteorologist.