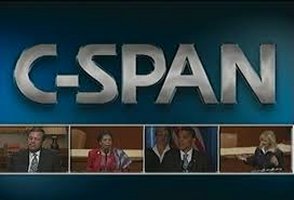 This week marks the 40th anniversary of C-Span, aka television for political junkies.

“The New York Times” gives us a look back at the quiet beginnings, to the days when C-Span’s staff could fit around a diner four-top.

Susan Swain, one of C-Span’s two chief executives, talked about those early days.

“The fact that people could actually see their elected representatives in their living room — and now on their phones — was a fundamental change. In the past, people might pull the lever every two years for their member of Congress and, if they were super engaged, might read a newsletter that came in the mail or go to an occasional town hall meeting.”

“This meant that any time you were interested, you could watch what your member of Congress had to say.”

“Members had concerns that the cameras would be swinging around and taking pictures of members while they were not focused attentively on the debates or — heaven forbid — closing their eyes for a second. Or today, perhaps they might be sending out a tweet.”

“One of the ways this finally came to bear was that they created a compromise that members could live with. The compromise was that the House of Representatives, the speaker’s office, would control the cameras that were on the floor of the House.”

As for C-Span’s relevance in the social media age:

“I think most people who are in their 20s or younger, if they have an experience with C-Span it is through social media, it is through the late-night comedians. The creation of our video library in 1987 was every bit as significant as the original creation of C-Span.”