Back in the dark ages, I worked at a TV station which employed a voice-over guy.  He sat around read the paper and then at the exact time as credits ran on a show, he’d  hit the toggle switch, the On-Air sign would light up and he’d preview what was “coming up later on Action News” or “stay tuned for Jeopardy.” 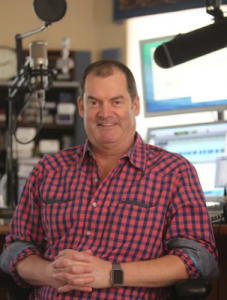 He eventually retired and his voice was replaced with one that many of you, if not all have heard at one time or another blaring from a TV set in the newsroom.

The industry was saddened Friday to learn of the death of  acclaimed voice-over artist Chris Corley.

He died from pancreatic cancer at age 55.

Born Charles Reynard Corley in Columbia, South Carolina, Corley  preferred playing with the radio instead of doing homework. When he started actually working in radio, his father, a successful television manager, warned that the path of a radio DJ was low paying and a dead-end choice. He predicted Chris would end up in sales, according to profile story May 2016 in The Fort Myers News-Press.

The aspiring announcer went to school at Western Carolina University but dropped out after realizing he knew more about radio than some of his professors.

Chris loved the rock music genre and his deep, masculine voice was a perfect fit.

He first moved to Fort Myers in the mid-’80s and helped get WRXK  96 K-Rock on the air.

He then moved around the country a lot and ended up in Los Angeles where, along with New York City, voice-over artists were hitting it big.

His career snowballed and he was unknowingly taking clients from an agent in New York.

That agent ended up signing Chris and opening the lucrative doors to television.

From the humble beginning of voicing for regional TV stations, Chris’ portfolio grew to include work for CNN, ESPN, FOX Entertainment, Nickelodeon and the MLB Network to name a few.

His voice will be missed.

You can hear some of his work here.

(Our friends at Media Confidential contributed to this report.)