40 years ago, C-SPAN was sprung upon the world as one of those cable channels down at the end of the listings.

While heralded at the time, its eventual impact was not, and could not have been predicted.

Now, the man who was the face of C-SPAN every year of the cable outlet’s existence is retiring. 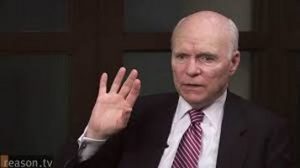 Founder and chairman Brian Lamb will hang it up May 19th and one last Sunday night interview program.

It’s a program he’s been hosting for 30 years.

Fittingly, his last interview will be with historian David McCullough.

Thanks to Lamb’s brain child, Americans have been given a window into just how the Washington sausage is made.

Admittedly, legislators are usually on their best behavior on the Senate and House floors and hearing rooms, and we haven’t yet been granted access to cloakrooms and caucuses.

And even Lamb himself admits that despite that window provided by C-SPAN, there’s still a lot behind the scenes that Americans aren’t aware of, but should be.

“Lying is the word that I would use to describe this town,” said Lamb. “I don’t know if it will ever stop. It’s gotten worse rather than getting better and both sides do it. You’ve got to listen very carefully to what they’re saying.

But C-SPAN provided us some opportunity to get smarter over the years.