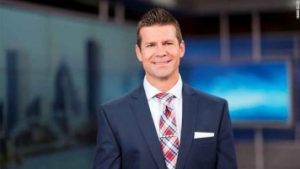 Jeremy Kappell, who got bounced as chief meteorologist last January at Hubbard’s WHEC in Rochester, NY, is hoping to walk across the street to become chief met at Nexstar’s WROC.

Nexstar posted the job last week even though the station still identifies Stacey Pensgen as its chief meteorologist.

Pensgen describes herself the same way on social media and continues to deliver the forecast on WROC.

“I am interested in the opportunity and I did apply for the position last week,” Kappell said Monday. “I have not heard from WROC yet.”

For her part, Pengsen is maintaining radio silence about the ad and its implications.

Kappell is in the middle of a lawsuit against his former station for wrongful termination over his on-air botch in which he referred to Martin Luther King Jr. Memorial Park as “Martin Luther coon King Jr. Park.”

Kappell said he jumbled his words; the station characterized the utterance as a racial slur.