It was a big weekend for WCHS (ABC), which was recognized for the second year in a row as Television Station of the Year. 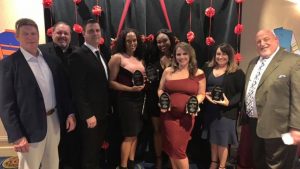 The award was presented Saturday during the West Virginia Broadcasters Association’s awards ceremony.

Rubin’s awards were for her coverage of the Lewis County murder trial of Lena Marie Lunsford Conaway, who was convicted in the death of her 3-year-old daughter, Aliayah, and an interview she did with Aliayah’s sister, Destiny Cole, following the trial.

Bass’ award was for his coverage of a series of stories on the discovery of the body of Leslie Marty, who was abducted and murdered in Wood County more than 35 years ago. A tip that Bass received from the man convicted in her death, Mark Hanna, led to the discovery of her body.

In April, WCHS-TV was named Outstanding News Operation of the Virginias. Judges selected WCHS from stations throughout West Virginia and Virginia.