In Oregon, a Multnomah County jury acquitted a 33-year-old woman of charges that she assaulted a TV news cameraman during a protest last summer outside the Southwest Portland offices of U.S. Immigration and Customs Enforcement. 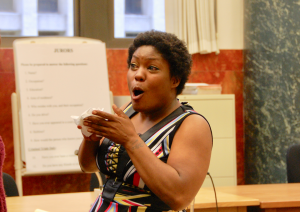 Prosecutors contended that James slammed a wooden gate into the back of Maynard’s head on June 28 and that she appeared to be motivated by her hostility toward the media.

But during a four-day trial that ended last week in Circuit Court, James and her defense attorney contended that she hadn’t swung the gate into the cameraman. They also claimed the cameraman conjured up a story that the government then latched on to bring her down.

Yet there was no dispute that James was unhappy with the TV coverageas demonstrators camped on Day 11 of the five-week-long protest outside ICE offices. The group had gathered in opposition to the Trump administration’s policy of separating immigrant children from their parents along the U.S.-Mexico border.

Jurors watched video of James, wearing a pink camouflage outfit, exclaiming “(Expletive) the media!,” calling the KATU employees “maggots” and broadcasting on her Facebook Live account as she insulted the KATU reporter’s makeup and clothes.

A KOIN-6 cameraman, who had been standing next to Maynard, said he saw James intentionally swing the gate into Maynard.

In a Facebook post five days after the protest encounter, Genevieve Reaume, the KATU reporter, described what she said were physical and verbal assaults on “multiple journalists” by “multiple protesters” that day.

“This treatment is unacceptable and will not be tolerated,” Reaume wrote. “We are here to do an important job, to talk to all sides, to find the truth and report the facts.”

According to the coalition of American journalists who have formed the U.S. Press Freedom Tracker, 42 journalists were attacked in 2018 and 10 so far this year.