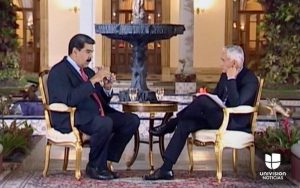 Over the weekend, Univision was finally able to air, three months after the material was seized, the video of a contentious interview with Venezuelan President Nicolás Maduro that was confiscated after he cut it short.

You can see it here.

How contentious was it?

Maduro not only cut the interview short but journalist Jorge Ramos, who was asking the questions, was detained.

The interview lasted 17 minutes before Maduro walked out after accusing Ramos of provoking him.

Ramos said the recovery of the video was “a real triumph against censorship” and that it was returned by “confidential sources” who cannot be named out of concern for their safety.

Ramos and his team were deported from Venezuela after Maduro abruptly ended the interview.