We all have those certain times in our careers we look back and remember.

Maybe it was the News Director kicking a trash can after seeing a story on a competitor labeled ‘exclusive’ or perhaps a more satisfying memory, like the one shared Wednesday by WWL (CBS) Assistant News Director Michael Bean. 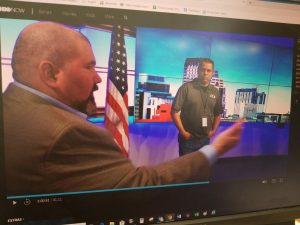 He caught a glimpse of himself on an HBO special regarding media favorite Rep. Robert Francis “Beto” O’Rourke.

“Well, I didn’t expect to show up on HBO (ahem, humblebrag), but there I am. The image is from the doc “Running with Beto.” I appear for all of 7 seconds. So I guess you could say I’m a big deal. Joking aside, this was the U.S. Senate debate in San Antonio last year. WFAA teamed up with the great folks at KENS to produce it. The very next day I drove back to Dallas, loaded my entire house into a Uhaul, and moved to New Orleans. It is a career and an adventure, and I wouldn’t have it any other way.”

Way to go Michael, WWL is a blow torch station and we are sure they are happy to have  you.