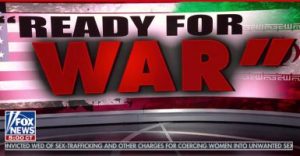 Fox News is all in for someone else’s sons and daughters to head for the front in yet another war.

The graphic look fairly screamed “Let’s Get It On” last week at the home of the Three Dumbest People On Television,” aka “Fox and Friends.” 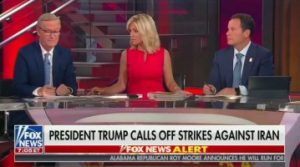 And things were so serious, the trio of challenged performers abandoned the kurvy kouch© in favor of a “Code Red” themed “serious anchor” set.

Guess they picked that up for a song from Sinclair.

But it didn’t work out as planned, when Mr. Trump called off a strike against Teheran at the last minute.

As a result, only Ainsley “I Want To Be A Journalist” Earhardt played the cautious note, observing that the White House “knows more than we do” and that “something’s happening behind the scenes, there’s a reason he hunkered down.”

After bringing on another retired general out of “Seven Days In May” who back the Kilmeade position, sparks began to fly.

When Earhardt repeated the Trump mantra that sanctions on Iran were working and tried to assure the audience that the president surely has a strategy, Kilmeade exploded, spitting out “No! The sanctions have been in place before. This is Iran’s response to the sanctions. Where is America’s response to Iran’s belligerence?”

At that point he left the studio and immediately signed up for military service.

No, of course he didn’t.

He continued mouthing off about the need for war, while Steve Doocy….Steve Freakin; Doocy…was forced to play the adult in the room.

Which is the toughest and least-utilized role in the “F&F” format.