Bob Fouts, who spent much of his broadcasting career calling NFL 49ers games, died Sunday in San Francisco, the Chronicle reports. He was 97. 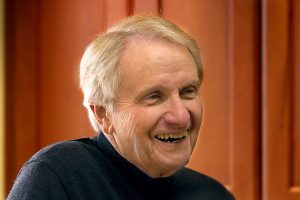 According to Media Confidential, Fouts is the father of Pro Football Hall of Fame quarterback Dan Fouts, who now is a CBS analyst and a member of the Hall of Fame selection committee.

Bob Fouts, who served in the Air Force in World War II, began handling broadcasts of 49ers game in the late 1940s when they still were part of the All-America Football Conference. After the team joined the NFL in 1950, Fouts called their games alternately on television for CBS and on radio for more than a decade.

His signature phrase was “red dog,” which he used to describe linebacker blitzes, and “Red Dog” became his nickname, according to the Chronicle.

Fouts earned induction into the Bay Area Radio Hall of Fame in 2008, along with another former 49ers broadcaster, Don Klein. Klein died Wednesday at 95.