Just days after the man accusing Kevin Spacey of groping him a Nantucket bar in 2016 suddenly dropped his civil lawsuit against the Oscar winner, the criminal case now looks to be close to collapse due to a missing phone. 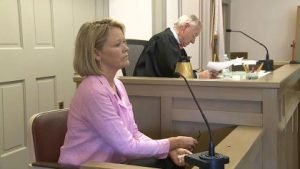 Spacey himself was not there, but the man and his parents — including his mother, former Boston TV anchor Heather Unruh — were on the stand Monday testifying about material they admit was deleted from the then-18-year-old’s iPhone three years ago before being handed over to local police.

Unruh admitted under oath that she deleted photos and videos from her son’s phone before she turned it over to police. “It was not relevant to the case,” she said. But Spacey’s attorney told Unruh that was not her decision to make. “I’m beginning to understand that,” she said.

What took things in the direction that the innocence asserting Spacey has long sought was the fact that no one seems to know where the phone in question is since the police returned it to the family in December 2017.

Spacey’s attorney explained in court that her testimony could potentially open her up to criminal prosecution. “It is illegal to delete, alter, manipulate any object, any data, anything,” he said.

Unruh’s son initially testified in court saying he did not delete anything on his phone that could potentially exonerate the actor. “I have no knowledge of any deletions on the phone,” he told the court. But moments later he changed his mind and exercised his Fifth Amendment right against self-incrimination.

The accuser is the only witness in the case and the only physical evidence is that missing phone.

The actor’s lawyer says he plans to file a motion to dismiss.