KENS (CBS) said hello to a new TV personality recently while saying goodbye to another in the Alamo City.

Sunday night, longtime weekend meteorologist Jared Silverman said adios to the station he has called home for the past 13 years.

Our @KENS5 goodbye video to @JaredKENS5 who's moving to Louisiana with his family. One of the best meteorologists ever and a professional through and through. I'm excited for the next chapter in your life outside of news. I'll miss you so much! #kens5eyewitness pic.twitter.com/IBAI9WeXBG

“I decided to leave primarily due to family reasons,” Silverman told mySA in an email. “It’s just my wife, our daughter, and myself out here in San Antonio, which we were able to deal with for a while. But as the saying goes, it takes a village to raise your kids … so we wanted to be closer to family.”

Silverman and his family will be heading east to Louisiana where his wife’s family lives.

He said he will combine his passion for meteorology with another passion he has long considered, teaching.

My second passion behind meteorology has always been teaching. I’ve always been a bit jealous of teacher’s schedules, having weekends off, holidays off, and summers off,” Silverman wrote in the email. “As such, I’ve accepted employment for two jobs, one full time, one part time as a teacher, and as an adjunct professor. I will be teaching Geo-science with weather included.” 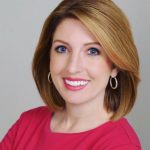 “I’ve been working in Waco for the last two years,” Stouffer told mySA in an email. “When it came time for me to move on, I knew I wanted to stay in Texas. KENS 5 has a great reputation. The talented journalists who work here are creative and care deeply about their community. This is a team I’m proud to be a part of.”