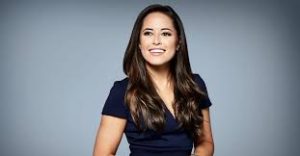 Kaylee Hartung, a former ESPN reporter who seems to have disappeared since she was lured away to CNN more than two and a half year ago, might have a higher profile in her new job.

She’s back in the Disney fold, this time as an ABC News correspondent.

Hartung was a sideline reporter for ESPN when she caught the eye of Jeff Zucker who hired her away in March of 2017.

While at CNN, she covered the white nationalist rally in Charlottesville, the Georgia gubernatorial race and reported on extreme weather events including Hurricane Florence, Hurricane Harvey, Hurricane Irma and wildfires in Malibu and Paradise, CA.

Then, for no evident reason, she dropped off the radar.