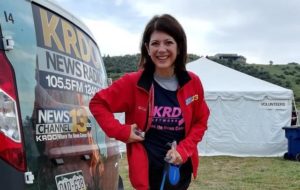 Brinias still works at KRDO but in a different capacity. General manager Mark Pimentel confirmed Brinias is still at the station, but she has taken a position as a producer. The move is expected to be permanent.

This isn’t the first time viewers will bid adieu to Brinias. She worked at KKTV (CBS) from 2006 to 2012 and was the evening co-anchor with Don Ward before moving to Sacramento to take the main anchor position at KOVR-TV, a CBS affiliate.