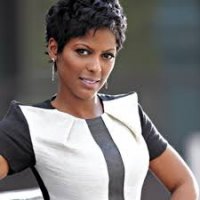 Tamron Hall is ramping up for the debut of her new syndicated daily talker next month, but there’s one thing she can’t get out of her mind.

“Megyn’s success or not, I already knew they made the wrong choice when I left the door. So I would never measure myself by her success or perceived lack thereof. I knew, the day I left, that it was the wrong decision. That’s why I left,” said Hall, who had become part of the “Today” team in 2014 after joining MSNBC and NBC in 2007.

Hall, of course, is referring to Megyn Kelly’s all-too-brief and all-too-expensive $69 million 11-month NBC experience which included displacing Hall in the third hours of “Today.”

Bless ya, Tamron, that is was a mistake was pretty clear to everyone with a nodding acquaintance of morning show dynamics and Kelly’s sharp-elbowed approach to fronting a tv program.

Hall continued, “People come to me all the time: ‘How did you feel?’ I say, ‘Listen, my favorite movie growing up was “Rocky” because he got up, man.’ So you get up, and you share that experience. And that’s what this show is about.”

We’re still waiting to hear what Kelly’s next act will be, but that severance package has certainly softened the blow of being dumped.