Maybe she learned something during three years on the beach. 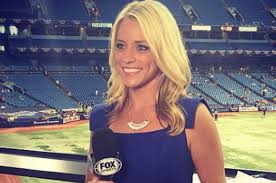 Austen, previously canned for making offensive remarks during an appearance in a Barstool Sports video, announced last week that she has joined Liberty University’s “Game On” sports TV show.

During the video broadcast in June 2016, Austen said she “didn’t even know that Mexicans were that smart” and the “Chinese guy is always the smartest guy in the class,” and called a Jewish customer she once had as a server a “stingy a–hole,” and referred to Cleveland Cavaliers basketball player Kevin Love as a “little bitch.”

She pretty much hit for the cycle in boneheaded  and offensive comments.

And now Jerry Falwell Jr’s roosting place is giving her another shot at what she called her “dream job” – a career in sports reporting.

Austen said over the past few years, “most of my days have consisted of severe anxiety, a dark depression and overwhelming regret,” also noting that while she is “not the victim here,” she learned “words are extremely powerful.”

“I realize that I hurt and offended countless people with my comments. For that, I am forever sorry and remorseful,” Austen wrote.

Give us a moment here…..