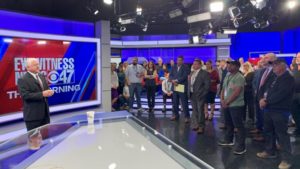 He joins Nexstar from KVAL (CBS) and KMTR (NBC/CW) in Eugene, OR where he served as Vice President and General Manager.

The appointment is a homecoming for Jackson, who worked for nearly a decade in Fresno, serving as General Sales Manager at KMPH(FOX) and KFRE (CW).

Prior to living in Central Valley, he served as General Sales Manager for KOVR(CBS) in Sacramento, CA.