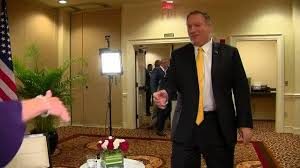 It was supposed to be a series of sitdown softballs for Secretary of State Mike Pompeo when he visited Nashville on Friday.

After all, local reporters are dummies and supposedly in awe when the big boys from DC deign to sit down with them, right?

Then he ran into the buzzsaw that is Nashville veteran reporter Nancy Amons of Meredith’s WSMV.

After welcoming the Secretary of State to Nashville, Amons signaled to Pompeo that the interview would not be a cakewalk, saying, “I’m gonna start right away with the tough stuff that you’re expecting.” Pompeo smiled and said, “Ask away.”

Amons first set up her line of questioning by mentioning Michael McKinley, Pompeo’s senior adviser who resigned this week, telling told the Secretary that McKinley has added his voice to a number of career diplomats who have expressed frustration over what they see as Pompeo’s “failure to stand-up government servants like Marie Yovanovitch [the former U.S. ambassador to Ukraine] who was caught up in the Ukraine controversy.”

With Pompeo’s initial welcoming smile now a thing of the past, Amons asked “Did you do enough to defend the ambassador both publicly and privately against the smear campaign that was being waged against her?”

Pompeo fell back on the time-honored “your facts are wrong” defense and a patronizing scolding.

“You should be careful with things that you assert as facts before you state them.”

Then Pompeo proceeded to do what he would continue to do throughout Amons’s tough and precise questioning—sit stoically and recite a talking point mantra about being “incredibly proud of the work that I’ve done, along with my team and other senior leaders of the state department…”

Throughout her seven minute exchange with Pompeo, she persisted while Pompeo stonewalled and looks obviously displeased.

And that is how it’s done.