Estrella TV is giving morning television news another go with “En La Mañana,” airing live from EstrellaTV’s Dallas television studios Monday through Friday from 7 to 9 am. 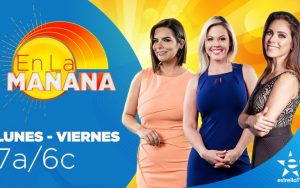 Martell most recently worked for Nación ESPN and was host of Fox Sports Mexico’s “Central Fox.”

Sulbarán’s was an anchor at Venevisión, host and producer at Venezuela’s Globovision and field reporter and morning anchor at “Canal de Noticias.”

Pereira has worked as a producer, field reporter and news anchor for Globovision.