Ron Magers, who retired in 2016 after a distinguished career as one of Chicago’s all-time greatest news anchors, will be back in the spotlight to take a bow this spring according to robertfeder.com. 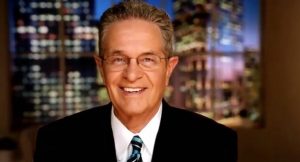 Magers has been named recipient of the 2020 Distinguished Journalist Award from DePaul University’s Center for Journalism Integrity and Excellence. He will be honored at a luncheon April 30 along with Chicago Tribune police reporter Jeremy Gorner, who will receive the Distinguished Alumnus Award.

Carol Marin, who is co-director of the Center for Journalism Integrity and Excellence with Don Moseley, co-anchored with Magers at NBC-owned WMAQ-Channel 5 until 1997, when both resigned in protest over the hiring of talk show host Jerry Springer as a commentator on the 10 p.m. news.

Calling Magers “the best of the best,” Marin said: “He could — and did — do it all. He was knowledgeable on election nights. Unflappable in breaking news situations. Smooth, funny and smart in championship sports celebrations. He was thoughtful, with perfect pitch, when a Catholic cardinal was elevated in Rome or mourned at Holy Name Cathedral in Chicago.

“Don and I firmly believe that the importance of local news in America and the public’s trust in it is embodied in the life’s work of Ron Magers.”

Magers, 75, stepped down after 18 years at top-rated ABC-owned WLS-Channel 7 (and 16 years before that at NBC 5). All told his career in TV news spanned more than 50 years. He and his wife now divide their time between homes Chicago and in Florida.