WTXF (FOX) reporter Bruce Gordon has retired after 23 years at the station. 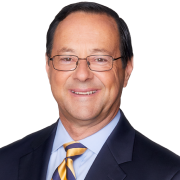 During a segment last week on the station morning show, he called working there “a great honor.”

Gordon joined the FOX 29 News team as a general assignment reporter in 1996.

He kicked off his on-air TV career in Abilene, TX, working first for KTXS-TV as a sports anchor, then at KTAB-TV as a news reporter.

In 1983, he moved to Austin, TX, for a reporting job with the CBS affiliate, KTBC-TV, and in 1987, left Texas for a job in St. Louis, MO. For seven years he focused first on consumer, then environmental reporting at KTVI-TV.

Bruce has won several Associated Press “Best Reporter” awards and received national recognition for an undercover report on pedophilia. He’s a 10-time regional EMMY Award winner, including both the 2003 and 2004 awards for “Best Hard News Reporter.”

Bruce lives in Delaware County, Pa., with his wife and three children.