A former television reporter appealed on Monday a civil court ruling ordering him to pay damages to Japanese #MeToo symbol and journalist Shiori Ito in a high-profile rape case. 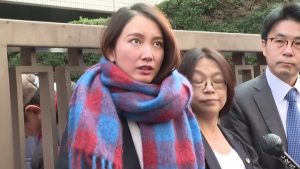 Noriyuki Yamaguchi, a former Washington bureau chief for Tokyo Broadcasting System Television Inc. and biographer of Prime Minister Shinzo Abe, has denied Ito’s allegation that he had sexual intercourse with her without her consent at a Tokyo hotel in 2015 while she was in a state of intoxication and unconscious.

The court rejected a counter-lawsuit filed by Yamaguchi seeking 130 million yen in compensation from Ito. He claimed his social reputation has been damaged by her remarks.

Ito filed a criminal complaint with police, but prosecutors dropped the case in 2016.