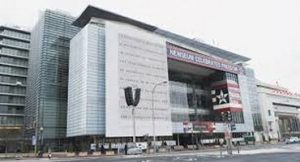 The Newseum closed the doors on its lavish District of Columbia digs at the end of 2019, the victim of hubris, overspending, overcharging and, in recent years, the nurturing of an official hostile attitude toward media.

It is ironic indeed that now, of all times, an institution ostensibly built to exalt and explain the importance of the First Amendment should go under.

Is it worth saving and if so, where should the resurrection of the Newseum occur?

That is the proposal offered up in an opinion column by a former Connecticut newsman-turned-pr-guy.

Writing on medium.com, Bernard Kavaler acknowledges that while Hartford may not immediately come to mind as the home for a beacon to press freedom and the First Amendment, it does have some threads to beging to weave a narrative:

Consider this: how many people associated rock’n’roll with Cleveland before the Hall of Fame was built there in 1995? According to Ohio History Connection, a number of cities sought the museum, but Cleveland won. More than 600,000 people signed a petition asking that the museum be located there, ostensibly because Cleveland was where disc jockey Alan Freed first voiced the term “Rock and Roll.”

Hartford’s — and Connecticut’s — connection to the history of news coverage is at least as strong. The oldest continuously published newspaper in the nation is The Hartford Courant. The first commercial FM radio station in the country is WDRC-FM in Bloomfield (1939). WTNH in New Haven is among the oldest television stations in the nation, going on the air in 1948.

Less well-known but influential were Connecticut residents including the late Emerson Stone, responsible for extending CBS Radio’s hourly news broadcasts to 24 hours — making CBS the first to do so — and the first and only live call-in show with a sitting U.S. president, “Ask President Carter,” in 1977.

CT-N recently marked its 20th anniversary of live legislative coverage from Hartford. The Connecticut Broadcasters Association has been here for 70 years, and the Connecticut Journalism Hall of Fame is operated by the Connecticut chapter of the Society of Professional Journalists. Since 1991, the Vintage Radio and Communications Museum has been located in Windsor.

Right now, the Newseum’s extensive collection of more than 40,000 print news items, 200,000-plus photographic prints and negatives and more than 22,000 objects related to news gathering and First Amendment freedoms is under lock and key.

But it is available for loan.

And we kind of like the notion of a Newseum located in New England, arguably the cradle of the nation’s physical and constitutional birth.

A more modest re-birth far from the gaudy trappings of power as it exists today in Washington seems appropriate.