A new face is showing up on Cleveland television on WKYC’s fancifully-named “What Matters Most” (formerly known at the 6 o’clock News).

And a familiar face is moving to the equally playfully-monikered “Front Row” at 7. 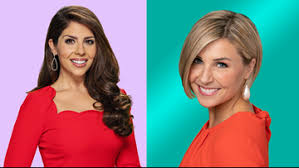 Laura Caso (left) is moving up from Hampton Roads, VA and Nexstar’s WAVY to slide into the 6 pm chair alongside Russ Mitchell.

She’s replacing Sara Shookman (right), who moves into the co-anchor chair next to Jim Donovan (see later in today’s newsletter).

Shookman (who is expecting her first baby) will continue on the 11pm news with Mitchell.

Caso also worked in Elmira, NY and Jacksonville, FL before landing at WAVY.

Shookman has been with WKYC since 2012 and became an anchor three years later.