The nation’s only African American news network, based in Tallahassee, launched nationwide Monday. 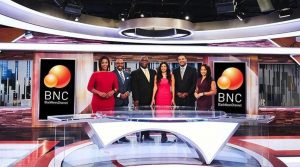 The launch also coincides with the 45th national Black History Month. Historian Carter G. Woodson, a founder of the Association for the Study of African American History, created the first celebration that became the annual tradition.

In October, Jacksonville Jaguars owner Shad Khan, worth an estimated $8 billion, announced he will be the network’s majority owner. He also owns Fulham Football Club of the English Football League, Four Seasons Hotel Toronto and All Elite Wrestling.

BNC’s collaboration with the National Newspaper Publishers Association (NNPA) — an organization that represents African American newspapers nationwide — will provide the network access to stories not covered by other news organizations.

The network will be available on Spectrum, Xfinity X-1, Platform and Dish Networks and, later, Sling, Vizio, Smart TVs, Xumo and Roku. Those distribution partners give it a reach of more than 100 million customers.