A former professor at Christ the King Seminary is facing charges that he stalked a television reporter investigating the Buffalo Catholic Diocese. 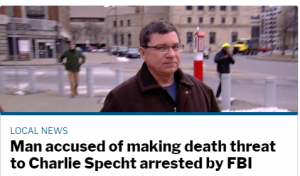 According to The Buffalo News, Federal prosecutors claim Paul E. Lubienecki engaged in a campaign of intimidation that included death threats against the journalist, who was unnamed in court documents.

WKBW(ABC) identified its reporter Charlie Specht as the person who received the threats. Specht has actively been involved in investigating the diocese’s sexual abuse scandal and has won state and national awards for his work.

“We were shocked, surprised and scared,” Specht said in a story on WKBW’s website. “I got the feeling that this one person – whoever they were – had spent months harassing me about really personal things, and was now threatening violence. I wanted my family to be safe. We put our trust in law enforcement to find out who was doing this.”

Arrested by the FBI Wednesday morning, Lubienecki faces two felony cyberstalking charges and, if convicted, a maximum sentence of five years in prison.