Giovanna Bechard, a former reporter for Portland Maine TV station WGME (CBS) won $10,000 competing on the game show Wheel of Fortune but fell short of making it to the final bonus round. 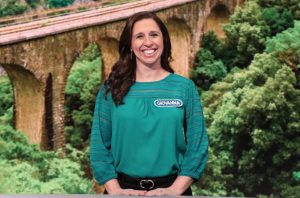 Bechard, who now works as communication director for the Maine Education Association, said she has watched the show her entire life. Her sister even competed on Wheel of Fortune a decade ago.

Bechard earned a spot on the show after a tryout event over the summer at UMaine. She was invited to a further audition in Bar Harbor before going to a television studio in Culver City, California, for taping.