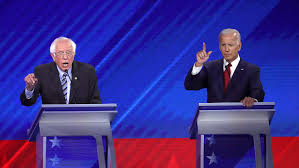 This Sunday’s scheduled Democratic Presidential debate on CNN has been moved from Arizona to Washington, DC and there will be no studio audience.

If, indeed, it takes place at all.

The lack of an audience might make for a better debate, actually.

They had taken on the air of game shows in recent months with moderators seeming to play for applause lines as much as the candidates themselves.

Out is Univision‘s  Jorge Ramos, who was to be one of the moderators.

He cited possible exposure to COVID-19 as the reason for his withdrawal.

And to recap – No March Madness, no NBA, Major League Baseball has suspended spring training and Opening Day is jeopardy.

The PGA has canceled the Players’ Championship, Disney and other theme parks operators have shut down.

And the market is in the tank, despite efforts to prop it up.

That was some reassuring address on Wednesday night, addressing what we were told was a political hoax and a media plot a week ago.

You are writing the first draft of what will be, in future, an incredible event in the history of world.

Stay safe and press on.